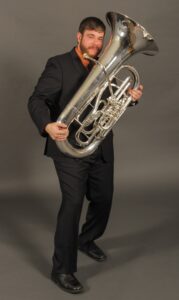 Dr. David Earll presently serves as the Professor of Tuba/Euphonium at the Ithaca College School of Music in Ithaca, New York.  In addition to his work with the Ithaca College Tuba/Euphonium Studio, David also currently performs with The Northern Lights Duo, The Cayuga Chamber Orchestra and CCO Brass Quintet as Acting Principal Tubist, The International Willson Low Brass Quintet, with The Syracuse Symphony/Symphoria, and the Ithaca Brass and has also performed with the Dubuque Symphony Orchestra, Ensemble Nouveau, the Tallgrass Brass Band, Sam & Dave’s Brass Extravaganza, the University of South Dakota Faculty Brass Quintet, and the Paris-based Opus 333 – Quatuor de Saxhorns. Before his appointment at Ithaca College, Dr. Earll also served on the faculty of the University of Wisconsin-Platteville and at Mesa Community College.

David is in demand as a solo artist, chamber musician, and clinician in both the United States and abroad.  Beyond his active work in North America, David makes regular appearances abroad, and has performed recently in Hong Kong, Germany, Austria, Switzerland, France, Spain, Norway, and the Netherlands.

David completed his Doctorate of Musical Arts in Tuba Performance at Arizona State University under the tutelage of Dr. Deanna Swoboda and received the 2016 Clifford Bevan Award for Excellence in Research for his dissertation.  He also holds a Master of Music in Tuba Performance from Arizona State University, where he served as a Teaching Assistant for Professor Sam Pilafian, and a Bachelor of Music in Music Performance at the University of South Dakota.  In addition to his awards for research, David has won awards for musical artistry including the Northern Trust/Piper Enrichment Award.

David Earll is a Willson Tuba Artist and performs exclusively on the Willson 3200 F Tuba and the Willson 3050 CC Tuba.  Since Willson International Band Instruments endorsed him as a performing artist in 2014, David has made appearances across the globe as a soloist, chamber musician, brass band performer, clinician, and orchestral tubist all while performing on world-class Willson tubas.